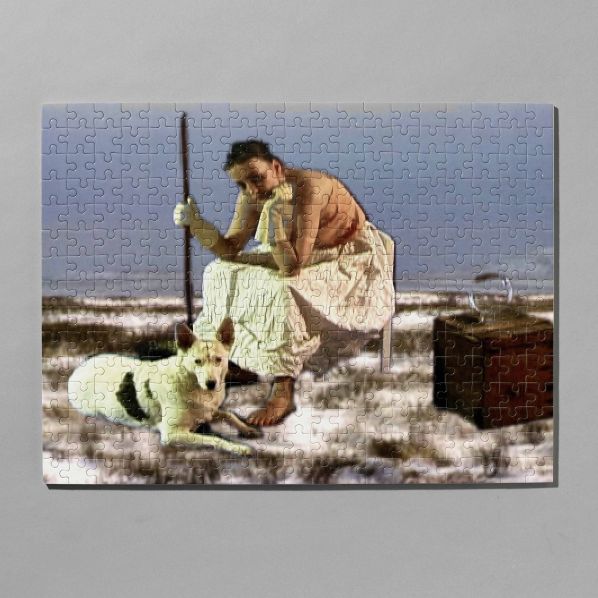 Availability: In stock
Special Price $135.00 Regular Price $150.00
Members save 10–20%. Join or log in .
Traditional Paper Puzzle. 100% Recycled Paper. 285 pieces. 12" x 16.5".
Description
Joan Jonas is an American visual artist and a pioneer of video and performance art, who is one of the most important female artists to emerge in the late 1960s and early 1970s. Jonas' projects and experiments provided the foundation on which much video performance art would be based. Her influences also extended to conceptual art, theatre, performance art and other visual media. She is a pioneer of video and performance art, and an acclaimed multimedia artist whose work typically encompasses video, performance, installation, sound, text, and drawing. Trained in art history and sculpture, Jonas was a central figure in the performance art movement of the late 1960s, and her experiments and productions in the late 1960s and early 1970s continue to be crucial to the development of many contemporary art genres, from performance and video to conceptual art and theater. Since 1968, her practice has explored ways of seeing, the rhythms of ritual, and the authority of objects and gestures.

The AXP Collector Editions comes ready to slide together for a complete instant puzzle and/or to be broken down for puzzling fun and/or framing and features Jonas's Melancholia, 2004. This video was part of The Shape the Scent the Feel of Things performance at Dia Beacon which premiered in 2005. It was utilized as a video backdrop projected on a large rolling screen and was inspired by Albert Durer's engraving Melancholia I (1514). In Jonas' video, Melancholia (performer Ragani Haas) is in an elaborately wrinkled white skirt and white gloves and is positioned in the center of the image. She is superimposed on a flat snow-covered landscape of low hills in a high plateau, high desert setting. The camera shifts back and forth over an empty vista. She is surrounded by various iconic objects. She performs various actions and as she leans against her elbow on the wooden cane, a white dog (Jonas' dog Zina) moves in and out of the frame, shifting and repositioning continuously in relation to her.